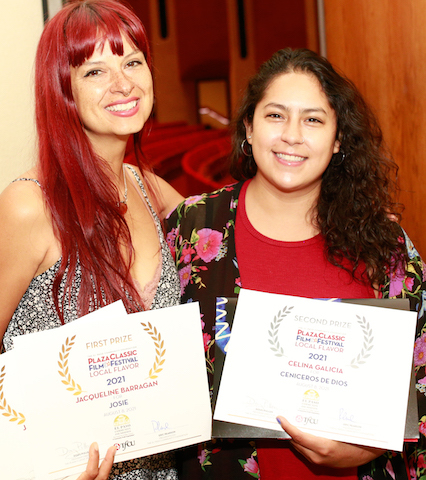 Barragan received the recognition for her 18-minute documentary JOSIE, about her mother’s battle to overcome abuse.

It was the first time in the awards’ four-year history that a filmmaker took top honors and was the top audience vote-getter.

It was also the first time in Local Flavor Awards history that female filmmakers claimed all of the honors.

The slightly mystical, Juarez-set Cenicero de Dios by Celina Galicia was selected for the $750 Second Prize. The comical Salvandor a Salvador by Luisa Gonzalez, “loosely” based on a true story, was chosen for the $500 Third Prize.

JOSIE and Cenicero de Dios also were selected for the 2020 Femme Frontera Showcase.

Seven of the 13 selections in this year’s two Local Flavor shorts programs were either directed by or produced by women, another first for the long-running local filmmaker showcase. Both programs were held in the Abraham Chavez Theatre, as was the awards ceremony.

The James Arrabito feature film submission, I See a Darkness, was screened out of competition in the Plaza Theatre.

Submissions for the 2022 Local Flavor showcase will open in March.