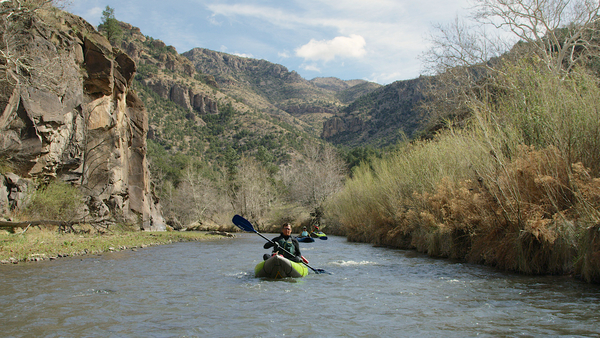 Friday’s premiere of the moving new documentary Hearts on the Gila — which comes a week after New Mexico’s Gila River was named the most endangered river in the country — will include special guests from the film.

The premiere screening of the documentary will be at 7 p.m. Friday, April 26 in the El Paso Community Foundation Room, 333 N. Oregon, across from San Jacinto Plaza. It is the first stop on a six-city tour of the film.

The screening will be followed by a Q&A with Albuquerque-based director David Garcia, and Patrice Mutchnick and Jennifer Mahl, two of the three women featured in the work-in-progress documentary, which will be entered into film festivals later this year.

Doors open at 6 p.m. Complimentary hors d’oeuvres will be served. There will be a cash bar (beer and wine). Parking is available nearby at the Chase/Mills Plaza Parking Garage on Oregon Street.

Admission is $10 at the door, or in advance at epcf.org/gila.

Hearts on the Gila chronicles friends Jennifer Douglass, Mahl and Mutchnick as they journey down the Gila River, the last free-flowing river in New Mexico. They were in search of hope and solace on a tribute voyage to their teenaged children — Ella Jaz Kirk, Michael Sebastian Mahl and Ella Sala Myers — who died in 2014 in a plane crash while conducting an environmental research project in the Gila Wilderness.

Grecia Nunez, a public lands fellow with New Mexico Wild, will give an update on federal wild and scenic legislation for the river. Alexandra Tager, a board member of the Heart of the Gila preservation and advocacy nonprofit, will be on hand to answer questions.

The El Paso Community Foundation Plaza Classic Film Festival hosts the screening, the first stop of a six-city tour that includes Albuquerque, Santa Fe, Taos, Silver City and Mesilla in New Mexico. The tour is presented by Heart of the Gila, New Mexico Wild and the Center for Biological Diversity.

The filmmakers have launched a crowdfunding campaign to finish the film. Click here to contribute.

To learn more about the film or watch the trailer, click here.