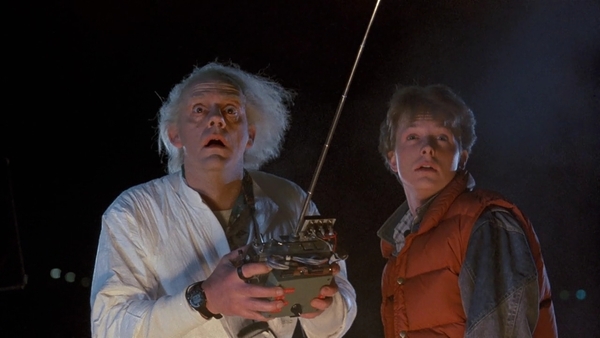 Plaza Classic goes back in time!

The Plaza Classic, which returns to downtown El Paso for its eighth year Aug. 6-16, will celebrate the 30th anniversary of Robert Zemeckis’ sci-fi comedy “Back to the Future,” which stars Michael J. Fox as a teenager who travels from 1985 to 1955 in a souped-up DeLorean (remember those?) to save eccentric inventor Doc Brown (Christopher Lloyd).

They are among 10 Plaza Classic announced today. Also scheduled:

• “Midnight Cowboy” (1969) — The controversial Best Picture winner stars Jon Voight as a male prostitute and Dustin Hoffman as a con man who meet up on the streets of New York City.

• “Enter the Dragon” (1973) — Bruce Lee’s last movie is considered one of the best martial arts films ever made.

• “Rope” (1948) — James Stewart stars in this Alfred Hitchcock film noir about a pair of friends who try to get away with the “perfect murder.”

• “Red River” (1948) — John Wayne showed off his acting chops in this Howard Hawks Western about a rancher who feuds with his adopted son (Montgomery Clift) on the Chisholm Trail.

• “The Stranger” (1946) — We honor Orson Welles’ centenary with this film noir he directed and starred in as a Nazi fugitive hiding in New England.

• “Harry Potter and the Chamber of Secrets” (2002) — The boy wizard takes on a giant snake in the second installment of the series based on J.K. Rowling’s wildly popular books.

Previously announced titles include “Monty Python and the Holy Grail,” “Help!,” ‘The King and I,” “Yankee Doodle Dandy,” “Shall We Dance,” “The Mark of Zorro” (1920 silent), “Hondo,” “One Flew Over the Cuckoo’s Nest,” “The Bicycle Thief,” “Y Tu Mama Tambien,” “The Rocky Horror Picture Show,” “Ladies & Gentlemen, the Rolling Stones” and the Talking Heads’ “Stop Making Sense.”