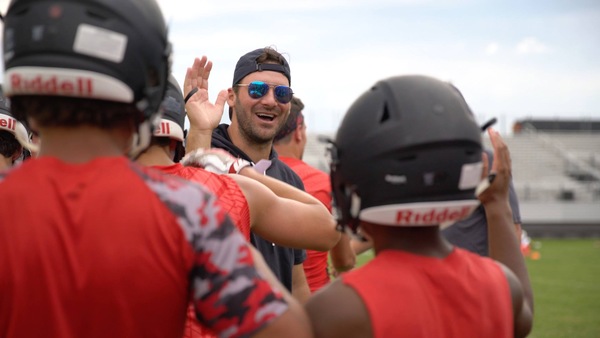 The 90-minute film will be shown at 3:30 p.m. Sunday, August 4 in the Philanthropy Theatre, which is inside the Plaza Theater Performing Arts Centre annex.

Steve Kaplowitz of ESPN Radio 600 will conduct a Q&A with Hanna after the screening.

Now or Never: A Tony Romo Story examines Romo’s development as an unassuming, multiple sports star of Mexican heritage in Burlington, Wisconsin, to his emergence as the quarterback and on-field leader of the Dallas Cowboys. Now retired, Romo is a star football analyst for CBS Sports.

Hanna is a veteran of the Plaza Classic Film Festival’s Local Flavor series (the deadline for entering this year’s Local Flavor is June 23). He interviewed Romo as well as family members, and former players and coaches from his high school and college days. He is hosting a private screening for Romo and his family and friends later this month in Burlington, with another screening later in Dallas.

“As a lifelong fan of sports and the Cowboys, I always wanted to combine this passion with my love for film,” Hanna said. “After reading an article on Tony Romo and his perceived failures, I was inspired to make a film which would give his life and career justice. It has been a long journey, and a true honor to tell Tony Romo’s story through his family and community. As a product of both Mexico and the USA, it has been a privilege to tell a story which has ties to both countries. I am excited to show our documentary in my hometown of El Paso, as well as in Tony Romo’s communities of Burlington, Wisconsin, and Dallas.”

Go to plazaclassic.com/schedule to see what’s showing this year. The list is almost complete.