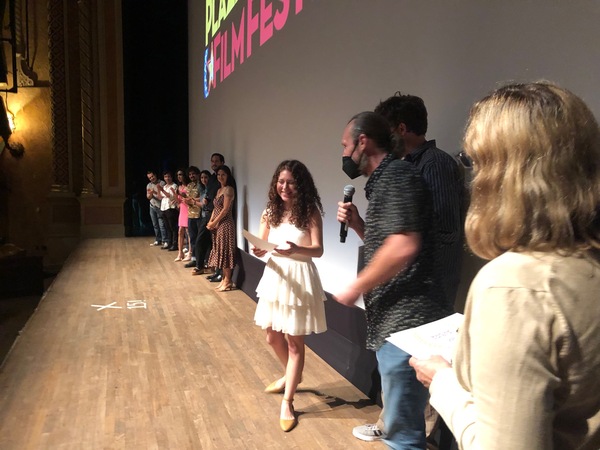 The $750 Second Prize went to Ryan Rox, also of Las Cruces, for the autobiographical That Tingling Sensation, a story rooted in the loss of a father.

This year’s Audience Favorite was Melody, an animated short by Lauren Roman of Las Cruces (pictured). The vote was conducted via text, with 140 audience members participating. She receives $250.

Katie Kelly of the Texas Film Commission was on hand for the awards ceremony, which followed this year’s Local Flavor showcase, the first time it was held in the Plaza Theatre. An after-party was held at the patio at the Hotel Paso del Norte.

In related news, the winner of the first Plaza Classic Film Festival Screenwriting Competition is The Secrets of Professor Thomas, which is based on a true story about a cellist’s dream to impart his love of classical music to children. It was written by Joni Ravenna of Palm Springs, CA, and Joshua Townshend-Zellner of Los Angeles, CA.

They will receive $500, a Final Draft 12 software package and a consultation with Impossible Dream Entertainment.

A free table read of the screenplay will be this year’s Filmmakers Brunch event at 11 am Sunday, August 7 in the Foundation Room, 333 N. Oregon.

Congratulations to all who participated this year!