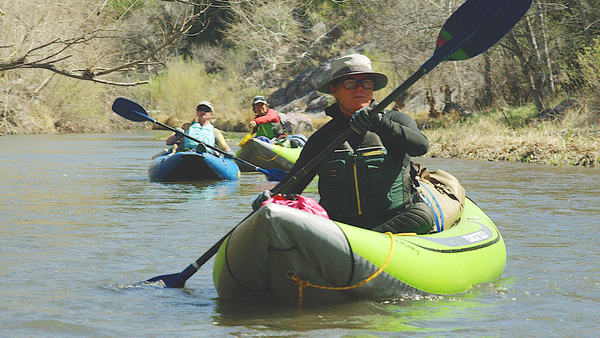 Journey down the Gila River with three mothers in search of hope and renewal after the tragic loss of their children in a screening of the work-in-progress documentary Hearts on the Gila at 7 p.m. Friday, April 26 in the El Paso Community Foundation’s Foundation Room, 333 N. Oregon, across from San Jacinto Plaza in downtown El Paso.

Complimentary hors d’oeuvres will be served. There will be a cash bar (beer and wine).

Parking is available nearby at the Chase/Mills Plaza Parking Garage on Oregon Street.

Admission is $10 at the door or online at epcf.org/gila. Proceeds go to Heart of the Gila.

Albuquerque filmmaker David Garcia and some of the film’s subjects will participate in a Q&A after the screening.

Hearts on the Gila takes place four years after three mothers lost their teenage children in a tragic plane crash. The women embarked on a 36-mile kayak journey down the Gila River into the Gila Wilderness in southwestern New Mexico. Their children, passionate environmentalists who were inextricably linked to the Gila, were studying the effects of a devastating forest fire when their plane went down in high wind. The mothers look for hope and solace on the waters of one of America’s last wild rivers and one of America’s great natural treasures.

In Garcia’s film, the women learn about themselves, their children’s legacies, and the importance of wild river systems to the spiritual health of humanity in a world where wild places are rapidly disappearing.

The tour of this work-in-progress version of Hearts on the Gila — which will be submitted to major film festivals around the world when completed this year — is designed to raise awareness of the challenges facing the river, which runs through the nation’s first official wilderness area. The screenings will be an opportunity for audience members to engage in a direct way with the filmmaking process and to dialogue in person with the filmmaker and some of the film’s subjects.