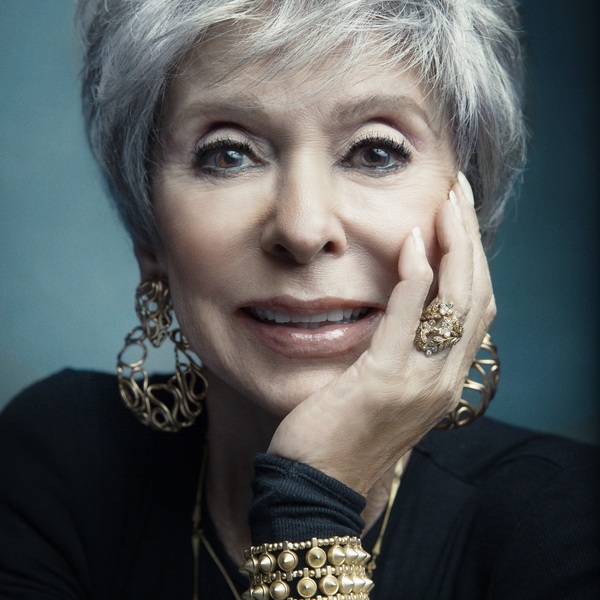 Rita Moreno is one of the very few performers to win an Oscar, an Emmy, a Tony and a Grammy, thus becoming an EGOT. She was born Rosita Dolores Alverío in the hospital in Humacao, Puerto Rico on December 11, 1931 (but raised in nearby, smaller Juncos, which had no hospital), to seamstress Rosa María (Marcano) and farmer Francisco José “Paco” Alverío. Her mother moved to New York City in 1937, taking Rita with her while leaving her reportedly unfaithful husband and Rita’s younger brother behind. Rita’s professional career began before she reached adolescence.

From the age of 9, she performed as a professional dancer in New York night clubs. At age 11, she landed her first movie experience, dubbing Spanish-language versions of US films. Less than a month before her 14th birthday on November 22, 1945, she made her Broadway debut in the play Skydrift. Although she would not appear again on Broadway for almost two decades, Rita Moreno, as she was billed in the play, had arrived professionally. In 1950, she was signed by MGM, but the studio dropped her option after just one year.

The cover of the March 1, 1954, edition of Life magazine featured a three-quarters, over-the-left-shoulder profile of the young Puerto Rican actress/entertainer with the provocative title “Rita Moreno: An Actresses’ Catalog of Sex and Innocence.” It was sexpot time, a stereotype that would plague her throughout the decade. If not cast as a Hispanic pepper pot, she could rely on being cast as another “exotic.” Because of a dearth of decent material, Moreno had to play roles in movies she considered degrading. Among the better pictures she appeared in were the classic Singin’ in the Rain (1952) and The King and I (1956).

Director Robert Wise, who was chosen to co-direct West Side Story (1961), a retelling of Shakespeare’s Romeo & Juliet that was a smash as a Broadway musical, cast Moreno as Anita, the Puerto Rican girlfriend of Sharks’ leader Bernardo, whose sister Maria is the piece’s Juliet. She won the Academy Award for Best Supporting Actress, but roles commensurate with her talent were not forthcoming in the 1960s.

The following decade would prove kinder, possibly because the beautiful Moreno had aged gracefully and could now be seen by filmmakers, TV producers and casting directors as something other than the spitfire/sexpot that Hispanic women were supposed to conform to. Ironically, it was in two vastly diverging roles — that of a $100 hooker in Carnal Knowledge (1971), director Mike Nichols’ brilliant acerbic look at male sexuality, and Milly the Helper in the children’s TV show The Electric Company (1971-77) — that signaled a career renaissance.

Rita won a Grammy Award for her contribution to The Electric Company soundtrack, following it up three years later with a Tony Award as Best Featured Actress in a Musical for The Ritz (a role she would reprise in the film version, which also featured El Paso native F. Murray Abraham). She then won TV’s Emmy Awards for The Muppet Show (1976) and The Rockford Files (1974). She has continued to work steadily on screen (both large and small) and on stage, including roles on HBO’s Oz and the Latinx reboot of One Day at a Time. She’s also the subject of Mariem Perez Riera’s documentary, Rita Moreno: Just a Girl Who Decided To Go For It. Moreno, who executive produced and appears in Steven Spielberg’s adaptation of West Side Story, which hit theaters in December 2021, has received several honors solidifying her reputation as a national treasure. They include the Presidential Medal of Freedom from President George W. Bush, the National Medal of Arts from President Barack Obama, a Kennedy Center Honors Lifetime Artistic Achievement Award and a Peabody Career Achievement Award.